Ziggy Marley, the eldest son of reggae icon Bob Marley, is on a Wild and Free Tour through the USA and Canada. And on Wednesday June 13, the five-time Grammy Award winner lit up the stage at Washington, DC’s historic Howard Theatre with a mix of songs from his own repertoire and a sprinkling of his father’s classics. The tour takes the name of his latest studio album, which was released last June, and features guest appearances from the late Heavy D and Ziggy’s own son Daniel. Media were given a three-song limit of time to shoot photos and video; I arrived late but managed to squeeze off a few shots END_OF_DOCUMENT_TOKEN_TO_BE_REPLACED 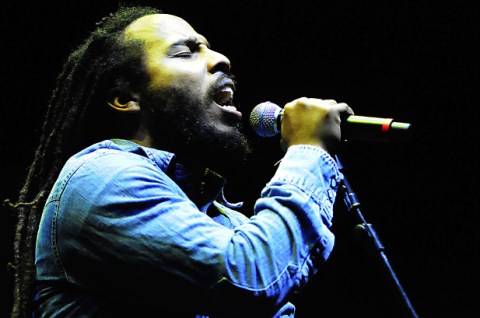 It was all it took for the bloggers at Boomshots to ask Ziggy Marley in a video interview: were you smoking something? Ziggy Marley, son of reggae icon Bob Marley, has been a proud advocate for the legalization of marijuana, and April 20th was no different. On a day of tribute to weed, marijuana, ganja, or however you prefer to refer to that controversial plant, Ziggy Marley’s new comic book was released in stores. And that book features a new superhero: Marijuana Man, who comes from another planet to help save the world through the power of Ganja. The new comic book superhero gains his powers through the plant, but END_OF_DOCUMENT_TOKEN_TO_BE_REPLACED

You are currently browsing entries tagged with Ziggy Marley at Afrofusion Lounge.