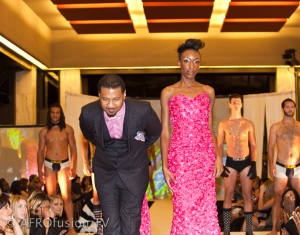 Ok, I promised to bring you video of the DC Fashion Week event finale. Belatedly though I do, here is the quick preview! One of the things I really appreciate about DC Fashion Week is the effort made by Executive Director Ean Williams to include and promote regional designers in this international event. At the International Couture Collections show at the French Embassy, local designers, like Heydari, were front and center along with designers from the Ukraine, Colombia, Yemen (Top Rank – DC based), Guyana (DonJ’ Moda), and the Ivory Coast. Afrofusion TV got a chance to speak with the young 17 year-old Ivorian designer (whom I wrote about in the earlier post) and a couple of others. The consensus was that African fashion’s acceptance into the mainstream is on a steady rise. Keep your eye out for these fantastic fashion designers! Bless…

Wolf versus Goat!?? What the deuce is that, I wondered? Turned out to be the name of the Spring/Summer 2011 collection from designer Mauro Farinelli… the theme being “contemporary prep meets ‘Oliver Twist!'” I didn’t quite know what to expect when DC Fashion Week held a fashion industry networking party at the trendy Tabaq Bistro on historic U Street in Washington, DC. It was a chance for fashion designers, stylists, models, makeup artists and other fashionistas to get together, reconnect, and network with each other. So they held a short fashion show featuring “Wolf Vs. Goat,” (still cracks me up) whose focus, according to the designer, is “simplicity, wearability and attention to

even the smallest of details.” Afrofusion TV’s Khadia chatted with DC Fashion Week Founder and Executive Director Ean Williams, and a young designer from Yemen, about the upcoming International Couture Collections show. Check out the video clip below, and the Photo Gallery for great pictures from the networking party. More from the DC Fashion Week finale at the French Embassy later on. Stay tuned!

You are currently browsing entries tagged with Yemen at Afrofusion Lounge.