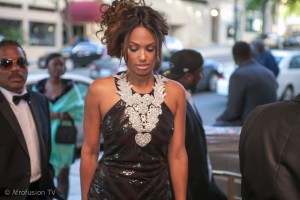 Actor K. D. Aubert arrives at the Warner Theatre for the NAFCA event

On the red carpet at Washington, DC’s Warner Theatre, actress K. D. Aubert was hopeful yet confident that she would win in one of the categories at the Nollywood and African Film Critics Awards, also known as the “African Oscars.” She did win, a Best Supporting Actress award in the Diaspora Film category for the movie Turning Point, which also stars Ernie Hudson, Jackie Appiah and Todd Bridges. This was the third edition of the Award show that started in 2011 in North Carolina; this year all of the guests and patrons we spoke to were excited to be in Washington. NAFCA founder Dr. Victor Olatoye told Afrofusion TV in an earlier interview that the number of media partners had more than doubled since they first started, and he’s hoping that more funding, greater exposure, and hard work END_OF_DOCUMENT_TOKEN_TO_BE_REPLACED

CEO of NAFCA Talks to Afrofusion TV about the African Oscars

Dr. Victor Olatoye, the CEO of the Nollywood and African Film Critics Awards (NAFCA) loves movies, but he was tired of watching Nollywood films that he thought were not up to par. So he decided that someone needed to be critiquing these films, so that directors didn’t feel like they could put out just any old tripe and call it a movie. He also wanted to acknowledge those that were putting in a serious effort to tell quality stories and make moving films. The Nollywood Film Critics USA was born out of that, and in 2011, the first NAFCA ceremony was held in Raleigh/Durham, North Carolina. This year, the awards event is being held at the Warner Theatre in Washington, DC, on Saturday September 14. Victor Olatoye took a moment to chat with Afrofusion TV about the upcoming show, the state of END_OF_DOCUMENT_TOKEN_TO_BE_REPLACED

You are currently browsing entries tagged with Warner Theatre at Afrofusion Lounge.