The name of the movie is curious enough to make you wonder what in the world it’s about. 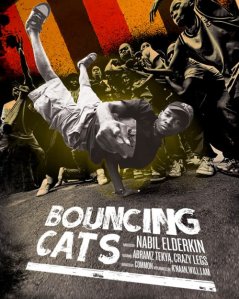 I’ve been hearing a great deal about Bouncing Cats, so I’ll probably catch it when it screens at National Geographic in Washington, DC next Tuesday November 9. After only a few months on the festival circuit, Bouncing Cats is already an award-winning feature, grabbing trophies at New York’s Urban World Film Festival and Newport Beach Film Festival, and an Audience Favorite Award at Doc Utah. It follows the inspiring story of a young Ugandan B-Boy “Abramz” (Abraham Tekya) and his Breakdance Project Uganda (BPU), 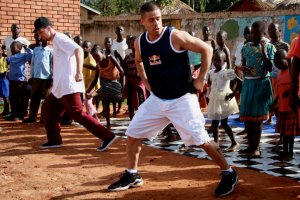 Crazy Legs and YNot in the movie Bouncing Cats

which he started in Kampala with the purpose of empowering disadvantaged youth, according to the film’s website: “using the unlikely tool of hip hop with the focus on b-boy culture and breakdance.” Abramz is able to secure the help of none other than Crazy Legs, of the world-famous New York breakdance group the Rock Steady Crew, to run breakdance workshops with kids from all over Uganda. Bouncing Cats is directed by Nabil Elderkin, a photographer and music video director who has worked with Kanye West and Damien Marley, amongst others. It features interviews with K’Naan, Mos Def and Wil.I.Am, and is narrated by Common. So, how about that intriguing title? According to a Moving Pictures review, Abramz  came up with a beat box phrase for audiences to repeat that would substitute  for the occasional absence of a sound system: “Bouncing cats, baboons and cats, bouncing cats, baboons and cats…” What could be more hip hop – and more African – than that? (As hip hop ambassador Toni Blackman once noted, using rhyming rhythmic patterns didn’t just start with rap.) For more on Breakdance Project Uganda, please visit their page on the film’s website. All photos courtesy of Bouncing Cats. Bless…