“Who in here remembers State of the Union? On U Street?” asked Lady Pcoq of the audience during an interlude where her group Lady Pcoq & the Plumes was performing at Bossa Bistro in Adams Morgan. I was among a few who raised their hands. Back in the late nineties while shooting a documentary film about poetry and spoken word in Washington, DC, I spent many an evening at joints like State, Kaffa House and Mangos. 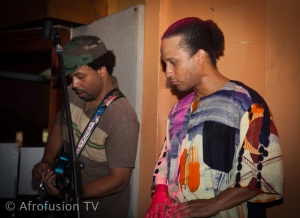 DP on guitar and Jali D on djembe

One remarkable thing I learned about all of the artists I encountered during that time: in addition to everything else they had going on in their busy lives, they stayed dedicated to their chosen art form and still continued to perform excellently. Lady Pcoq (Lisa Pegram is her real name) mentioned it because most – if not all – of the people she was on stage with that night were part of that thriving literary and artistic wellspring that was the DC poetry/spoken word scene. DC Mayor’s Arts Award recipient, DC WritersCorps teacher, DC Youth Poetry Slam Head Coach (3 times), Lady Pcoq has been as busy working as she has been creating. At Bossa Bistro, she felt compelled to pay homage to the whole band sharing the stage with her as she launched into an intricate rendition of the Eurythmics’s “Sweet Dreams.” The feeling amongst Mello-D, DP, D’Salaam, Jali D, Psalm, Bomani, and the rest of the crew, I’m sure, was mutual. Who were we to disagree? Mello-D and Lady Pcoq spoke with Afrofusion TV’s Riziki about their music and how they approach their work. Check out the video preview after the jump. Full feature coming soon on Afrofusion TV. Bless… 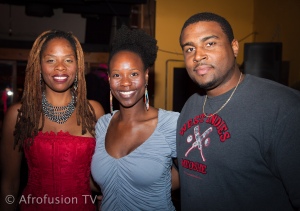 You are currently reading New Video: Lady Pcoq and Mello-D at Bossa Bistro at Afrofusion Lounge.