Mello-D & the Rados – The Sound of Live Hip Hop

“Amongst thousands and thousands of very good MCs, a poet will flow like the breeze…” Rhymes delivered by no less blessed an MC than KRS One, and certainly the first ones that came to mind when I heard Mello-D dropping lyrics on the mic a few weeks ago. 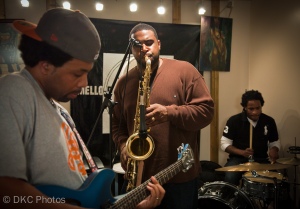 Now, I had seen Mello-D perform live before, even though I’d never met the rest of his band, the Rados. Well, when Afrofusion TV dropped in on one of the band’s rehearsal sessions in the basement studio of Mello-D’s house in suburban Washington, DC, I thought to myself: this is the sound of true live hip hop.

To put it quite plainly: if KRS One agrees to collaborate with you on your own track, like he did here with Mello D & the Rados on “Still Cool Witchu,” then you’ve gotta be a pretty solid MC.

The four piece band – Mello-D on vocals (and sax and keys) D’Salaam on Bass, Olugbenga on drums, and DP on lead guitar – produces a sound that has been compared to The Roots and A Tribe Called Quest, two of the most respected hip hop acts in the world! If you consider that both Mello-D (aka Darnley Hodge) and DP (aka Darrell Perry of the Poemcees) are products of that “furious flowering” in the early to mid nineties that many observers called the second black literary renaissance, then you begin to understand how it is that each of these band members is so multitalented.  Mello-D is not only a dope MC (can I still say that?), but also plays the sax, keyboards and bass while he’s at it. DP, coming from his own two-piece outfit the Poemcees, rocks the guitar but is actually an established MC in his own right (yes, he can freestyle on the mic with the best of them.) 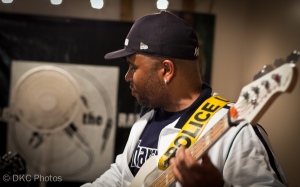 And even though they bill themselves as a live hip hop band, they can vary their styles at will. We listened as they transitioned smoothly from Janet Jackson soul to Bob Marley lovers rock, to straight up beats and rhymes hip hop. In fact, shades of reggae riddims – as on “Welcome to DC,” off the “Antitainment Vol. 2” CD – come compliment of Mello-D’s Caribbean roots (his father is from the island of Anguilla). Afrofusion TV will be proud to feature live hip hop band Mello-D & the Rados. For now check this out below: a quick snippet of what they got up to at the aforementioned rehearsal session. Mello-D & the Rados will be performing this coming Sunday October 24th at Bossa Bistro at 18th and Columbia Streets NW in Adams Morgan, Washington, DC. If you can appreciate solid, funky, clean, head-nod hip hop, be there. Bless…

You are currently reading Mello-D & the Rados – The Sound of Live Hip Hop at Afrofusion Lounge.