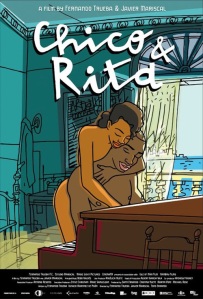 After running into the trailer for this animated feature film on thenublak, I can understand why film enthusiasts in the UK are so excited about Chico & Rita opening there on November the 19th. I know that it has already been screened in North American film festivals like Toronto and Telluride, but here’s what I really want to know: when can we see it in the cinemas stateside?? Spanish filmmaker Fernando Trueba (Belle Epoque, 1992) and Graphic Artist Javier Mariscal directed this love story that begins in Havana, Cuba and trumpets through New York and Las Vegas to the Afro-Cuban Jazz sounds of Bebo Valdés. It tells the story of Chico, a piano player, and Rita, a singer who unite in music, passion and romance, but their relationship gets stagnated by cruel circumstance and heartache.

Still from the movie Chico & Rita

Music by Dizzy Gillespie, Charlie Parker and Thelonious Monk also feature in this movie, along with Bebo’s son Chucho Valdés.  Not sure if it has obtained US distribution yet, but I’ll keep you posted. In the meantime you too can enjoy the UK trailer below. There is a great review of the film on the Latin Jazz Network that you can also check out. If you love jazz music, Afro-Cuban Jazz, animated films, or you’re just a hopeless romantic, this should be a real treat. Bless… 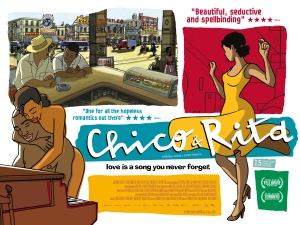